Author CJ Zahner lays the foundation for a suspenseful book using a creative license of dreams. The Government’s Dream Project is over, but the long-range impact was unknown.

Character development is powerful and believable, from the six-year-old Mikala discussing her dreams with her father, Detective Jack Daly, to the Monster Man. The trust between father and daughter is framed to perfection to grab readers. The reader knows immediately that family support is a mainstay of this story.

“Doubting his daughter’s words had long escaped him. Since she first explained about the movies—dreaming wide awake, she called the phenomena—their accuracy had dissolved any disbelief. But this couldn’t be. She must be wrong this time. Marky, the boy in her dreams, relayed movies of strangers. Visions that remarkably resembled abductions in their hometown.

Years before, he merely suspected she had inherited her mother’s gift. Now, he knew. She was Lisa’s replica. The one difference? Mikala was strong willed like her aunt Rachel, grounded at age six. Lisa couldn’t handle the dreams. Mikala could more than handle them. Like a miniature newscaster, she announced each scene to him until she came too close to the scary parts, and he nudged her by them. As an investigator promoted within the police force three years ago, the fact that his own daughter had a sixth sense was anything but coincidental. After all, his occupation and this curse of a trait so alive in his in-law’s family is what had led him to Lisa in the first place. But this was different. Now the gift—curse—befell his daughter. “Danny? As in your cousin Danny?””

Using dreams and psychic powers to locate missing children is only one piece of this deliciously complex tale. The layering of the investigative process takes the reader on a thrilling chase to find the culprit. Author Zahner leads the reader to several viable yet wrong conclusions on the identity of the criminal.

The paranormal aspects of this story play perfectly to the psychological elements. It is part of why this novel is an incredible page-turner. With my fondness for mystical experiences and dreams, I found a distinctive storyline, compelling well-development characters, and realistic dialog kept me engaged from page 1 to the very end. If you enjoy outstanding paranormal storytelling, then this book is for you.

Cyndie “CJ” Zahner is a digital-book hoarder, lover of can’t-put-down books, wife, mother, grandmother, author, and Mensa wannabe. That last trait explains the inspiration for her first novel, The Suicide Gene. Her second and third books, Dream Wide Awake and Project Dream, were inspired during long runs on Presque Isle State Park in the town she grew up in, Erie, Pennsylvania.

For her fourth novel, Zahner jumped genres, hopping from psychological thrillers to women’s humor. Friends Who Move Couches is a laugh-out-loud yet insightful “Almost a Memoir” novel inspired by her life. It touches upon family struggles, friendship wars, quieting your inner critic, and surviving rejection.

Zahner lives in Wendell, North Carolina now, but spends summer and fall in Erie. Before becoming a novelist, she worked as a grant and freelance writer. Her articles varied from business to women’s health to the paranormal.

In 2015, she began looking at life differently when her brother and his wife were diagnosed with dementia and early-onset Alzheimer’s. At that time, her husband pulled her aside and said, “Quit your job. You’re a writer.” After twenty years of service, Zahner picked up her purse at work one day and quietly walked away.

Now, she rises before dawn, writes, runs, and smiles much. She is currently completing two more novels, Within the Setting Sun, a historical romance, and Don’t Mind Me, I came with the House, a sequel to Friends Who Move Couches. A hard worker and story lover, she’s determined to read, write, and run happily ever after. 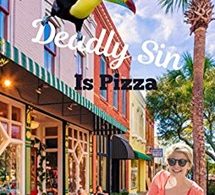