Author Larissa Reinhart continues the adventures of her captivating character Maizie Albright. The dialogue conveys wit, visuals, humor and makes a story that is impossible to turn off. I know if I’d read it rather than listened, I would still be a fan.

Maizie Albright, originally an actress starring in several roles, notably as a teenage detective, is pursuing her dream of joining the ranks as a full-fledged private investigator. Hiring on with the Black Pine’s Wyatt Nash. Nash wants to keep her at arm’s length, and her mind wanders to other things to investigate up close and personal.

Maizie’s probation requires her to avoid acting roles and stay out of trouble. The fun begins when a movie is slotted to film in Black Pine, staring an actress Maizie, Cam-Cam. Maizie’s notoriety with Nash Security Systems lands a job for the company to protect Cambria and keep her on the right track to succeed in her breakout role.  Producer Leonard Shackleton insists Maizie is the one he wants handling Cambria because of her familiarity with the industry.

In pure Maizie style, the security work sets up Nash to get closer to show biz than he ever wanted. As our hero, Maizie works at her job, she finds herself at odds with Cam-Cam, Nash, and her mother, her agent.

The mystery begins as Maizie spots bodies that disappear and digs for clues until Cam-Cam wants Maizie fired but will allow Nash to take the role. It gets more thrilling as the body count increases, though inexplicably, they vanish along with the evidence. Body doubles for some actors and actresses, muddy the trail of locating the killer, and risk Maizie’s probation.

The narration by Joan DuKore is even better in book 2. The delivery of the dialogue is snappy, emphasized, and contains perfect pregnant pauses. Voices are diverse and never miss associating with the correct characters. The quality of the audible was excellent, with no issues.

Honestly, I liked book 2 even better than the first one in the series. This is a fun story that kept me engaged from start to finish. Outstanding and highly recommended. The next one in the series is on my list. Wow.

Visit Larissa’s website to join her VIP Readers email group and get the free prequel to The Cupid Caper, plus other exclusive bonus content! https://www.larissareinhart.com

Larissa, her family, and Cairn Terrier, Biscuit, lived in Nagoya, Japan, but have returned to Peachtree City, Georgia. You can see them on HGTV’s House Hunters International “Living for the Weekend in Nagoya” episode. Larissa loves books, food, and traveling with her family. You can often see her adventures on Instagram (and her little dog, too).

The Cherry Tucker Mystery Series in reading order:
A CHRISTMAS QUICK SKETCH (prequel novella)
PORTRAIT OF A DEAD GUY
STILL LIFE IN BRUNSWICK STEW
HIJACK IN ABSTRACT
THE VIGILANTE VIGNETTE (Halloween novella)
DEATH IN PERSPECTIVE
THE BODY IN THE LANDSCAPE
A VIEW TO A CHILL
A COMPOSITION IN MURDER
A MOTHERLODE OF TROUBLE (in YEAR-LONG TROUBLE anthology)

Joan DuKore is a magician and actor in Las Vegas and performs both in Las Vegas and worldwide. In addition to performing on stage, she also is a voice-over actress and has done many audiobooks with a wide variety of characters, worked on voice-overs for various types of DVDs, and worked on ad campaigns for companies increasing their web presence. 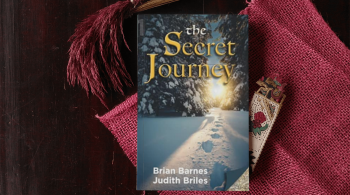