First time authors who create fictional stories drive readers to turn pages faster are exciting. I enjoy exploring how new authors make the decision to write their book as well as experienced authors who shift to a new genre and deliver an outstanding reader experience.

Today I am delighted to share insights from the authors who fashioned the haunting insights of The Secret Journey. This is the dynamite debut novel for Brian Barnes and a different type of story for the renowned Judith Briles. You may click to read my review of this out standing book 1 of the series.

Brian, I’d like to begin with you to allow readers to learn about your journey. Please share a bit of your background.

I have spent most of my life in commercial and residential construction. Starting a project from the foundation and solving the many problems to final completion and occupancy was the very gratifying. This background gave me the same opportunity, to start a story from the foundation. Only one difference, Judith and I became the architects and the builders of a young woman’s journey down a road filled with intrigue and danger. A journey that brought people together for a common cause, equality.

I would like to know why you decided to create a story set in France with a young girl who wants to change the norms of trading in 983 AD.

One day while listening to the news about the Iraq war, I realized that this is our third war since the second world war. I began thinking, why do we have wars and who are the benefactors? Wars are started for many reasons but almost all have a common element, men. Men start and fight wars, if in history a woman leader made a decision to start a war, she would have been surrounded by male advisers.

Starting with a question. What if, a girl was born in the year one thousand, the equivalent of a male born one thousand years earlier? leading a life devoted to the same principal’s peace, charity and equality. Entering a male dominated society, her mother and daughter are guided by a deity. With the church and Royals in control, creativity and persistence is their way to achieve their goals and yes, a little lady luck.

Judith, you have written over 40 books but this one is totally different for you. What compelled you to work with Brian on this amazing story?

In the beginning, I was Brian’s developmental editor and book coach. Quickly, I saw that his co-author contributed little to his process, often putting the kibosh on his ideas. There was “no juice” between the two of them and the storyline was overall boring.

The project was stalled when his old “co” basically dropped out. Brian’s frustrations mounted with him landing on my back deck for many hours monthly with a “what do I do” written all over him plus the words that came out of his mouth. Month after month, it was the same thing.

Finally, I said, “Terminate this writing relationship. End it now. I will work with you and get you back on track. I know she is your friend, but she can’t write and doesn’t add anything to the story development. This was your idea, Brian.”

Soon, his characters were waking me up at night. They talked to me. In working with Brian, I would often say that there was no way his character would do this or say that … . We got another fiction editor involved. Brian and I would write together in two to four hour stretches, over Zoom three to four times a week.

Huge sections of the original manuscript were slashed and burned. Brian trusted me to develop and expand the traits and experiences of Lisa to become Nichol, our kickass female protagonist. The book took on a different life and growth stream.

It was clear that I was still coaching him … in his writing and how to develop a book. It was also clear to me that I was more that a coach. Brian starting calling me his co-author in our sessions. One afternoon he said, “Your name should be on the book.”

As a co-author myself, I know some of the challenges. Judith, what was your biggest obstacle in completing this book?

Getting Brian to pull the plug on his original co-author. When that happened, the cloud lifted off of him and he was receptive to the massive number of changes that happened in the structure and rewrites.

Brian, your portrayal of Lisa, aka Nichol, has a psychological foundation. Did you intend that initially when you began this story?

Throughout history there have been extraordinary women, most have not had the same advantages from birth and throughout their life that men have had. I imagined a young woman who had opportunities that most young girls at that time in history did not have. A successful merchant father, a caregiver that taught her to read and write. Lisa has incredible ability and curiosity and yes, I developed Lisa’s character over time, but her foundation was always of great intellect.

I found complexities in Lisa’s character development resulted in her having opinions and insights of someone older, yet it feels realistic. What did you draw on to make her more mature than her age.

There are several characters like Maurice and Timo who readers will enjoy. Where did you get the ideas for these men?

Nichol’s journey from Marseilles to Paris is approximately four hundred miles, she would have met many travelers. At some point in her journey Nichol would seek a traveling companion. A monk would give her both security and conversation that allowed both to gain a different perspective into their lives.

Maurice was just a pawn in life. A complex person that Nichols brief meeting with him showed dangers that the poor faced when confronting the powerful.

The cover of The Secret Journey made me want to follow the footprints. What that your intention? And, who is the creator?

Yes … and follow our protagonist in her journey. It’s wintertime. The large trees were essential to her survival. Rebecca Finkel designed with our vision and input as each version was generated. I understand the essentials of pulling in a reader. Too many covers are unconnected—we wanted to connect to our buyers the moment they see they book’s cover and then carry it to the back.

There is a theme of empowering women with this book. Are women your only audience?
NO … but they are definitely the primary. Our storytelling takes them to the 11th century where women were at the lower part of the caste system and basically breeders. Young Lisa never saw herself that way. Gutsy Nichol has little fear and will let her inner voice, her strength move into auto pilot and take over.

You have historical references, period norms, and detailed descriptions of locations. How much research went into creating the realistic backdrop of this story?

Lots … but we are the first to admit that we have taken liberties.

Brian, I’d like you to relate your writing process and how it evolved during the creation of this book.

To me there is a strong correlation between history and current events, we should learn from history but current events tell us that our capacity understand that correlation is lacking. To take a time and place and create a different history and characters from what actually happen has given me many challenges that only time can cure.

Using computer terminology, I think you can cut and paste anyone from the eleventh century to this century and have a match and the other way around. I took an exceptional mother and daughter and sent them to the eleventh century, because there are many to choose from.

Judith, how did you leverage your skills in creating this story with Brian?

Yes, yes, and yes. They are woven throughout. Much more punch in it than the original had. Better descriptions to pull the reader in.  I think marketing as well, so I’m tuned into how to present the book once out.

Brian, do you intend to do more writing? If yes, will it continue this story or take a different direction?

Yes, this story is just beginning. The characters and events in The Secret Journey will continue to follow a path that is filled with new characters, challenges and dangers on their journey through book two, The Secret Hamlet.

The fun of developing a story is where the events and characters lead the way.

Judith, did you like Lisa and believe her actions justified?

Totally … I made her the kickass woman she became.

Brian, do you have a favorite character outside of Lisa/Nichol?

How are you alerting fans that this new release is available?

I will make it an Amazon bestseller to start the buzz factor. We will have social media presence to start building on the series—we are deep into the writing of Book 2- The Secret Hamlet.

Where and in what formats can readers find you book?

Presently—print and eBook. Audio will come along in 2023.

Do you read your book reviews? And how seriously do you take the comments?

All of them … clearly understanding that a book is not a fit for everyone. Fans come from reviewers.

Most authors I come across are readers. Brian, do you have a favorite genre to read?

I am a history and current events enthusiast, along with the latest science news

Where can people find and follow you on social media?

Do you some advice for up-and-coming authors?

Start writing. Don’t edit until you have a clear/clean stopping point. Read over at least the last page or chapter you stopped at to start transitioning you into the writing mode. Otherwise, you stop the creativity process.

Read within in your genre—what grabs you in the author’s phrasing and storytelling? These are learning tools.

Take a break from your writing.

There are NO set rules. Reward yourself for a chapter done … definitely for the book completion.

Some write every day. Some write in an airport; on trains; in coffee shops; even hiking. Some are binge writers. It’s knowing where your “place” is and going to it.—for Judith, it’s never a desk. A comfy chair – her back deck – a cruise ship—with either a hot mug of tea of tall glass of peach iced tea. 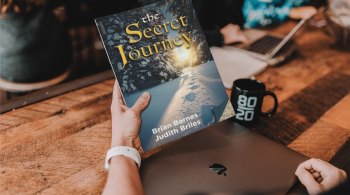