Ms. Hodge clearly combines her passion for family, faith, and storytelling into her debut novel. The three grown women, mother and her two daughters, are characterized in well-developed detail that highlights their individual strengths and weaknesses.

The lead female protagonist, eldest daughter Monique, has kept her chosen profession, as a CIA agent, from her family. When she is horribly injured, in a coma, the truth is revealed to her mother and sister. An interesting aspect is her mental discussions while in this state with an angel and what is instore for her future.

Constance, the widow, is the rock at the center of the family. Her foundation of faith is explored while her daughter is in the hospital with the aid of the staff chaplain, Steve. The potential relationship between them could be the stress of the ongoing situation with Monique, or something more.

Torrie, the younger sister, struggles with her faith as well as her willingness to share the feelings she keeps so deeply buried. This leaves her vulnerable to the opportunistic antagonist, Connor, which he uses to his advantage.

Multiple crimes come to light and are explored by local authorities, CIA, and FBI, with a bit of confusion added in by Homeland Security. Out of these authorities, I enjoyed Eve and Mike, the local detectives the most. I felt they were the most developed authority figures. When they spend extra time reviewing all the facts and present their conclusions to the CIA, heck I applauded their conclusion and the way it began below.

“Eve quickly interjected: “Mike and I have gone over every incident that happened, including those we only generally know about. At first glance, they seem like random acts with no correlation. However, the common denominator in all the incidents is Connor.  Everything stems from something he seems to have set in motion.”

This is action-packed with multiple crimes, within crimes and the final answers aren’t revealed until the end. Some additional polish would make this outstanding.

Roxanne Gail Hodge is the mother of two daughters and grandmother of four, two boys and two girls. She grew up with five siblings moving often because her father was in the military. Books became her friend. She discovered a love for writing and words in her middle twenties and aspired to write for the pleasure of others ever since. It wasn’t until she retired in 2017 that she’s found the time to pursue her dream. 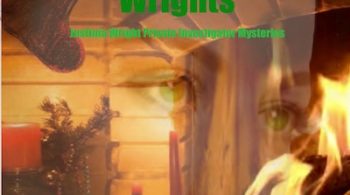